SUSAN G. KOMEN FOR THE CURE

LAST WEEKEND TO BUY IT BEFORE IT IS GONE FOR GOOD!! GO 1-CLICK NOW AT AMAZON!!

Releasing control is relief…
I was warned about men like Brett Maclean.
He was dark and thrilling, intense and controlling. And he captivated me from the very start. He unleashed something inside of me like no other. His bad rep and troubled past drew me to him like gasoline feeding a flame.
With just one taste, I felt the danger in him, the uncontrollable power that left me breathless. The passion consumed me. Fast and hard.
Temptation couldn’t guard my heart. I should have known a man of such raw and wild desires came with competition.

Brooke has spent the past eleven years living with a man she thought would be her forever. One afternoon of unanswered phone calls reveals he isn’t the man she thought he was.
Just when things couldn’t get any worse, she’s forced to call upon a stranger for help.
Can Dylan save Brooke from her broken past or does he have secrets of his own that will destroy them before they even get started?

Logan Clay is a dreamy, starving artist working multiple jobs to support his ailing mother and unemployed father, all while pursuing his dream of becoming a famous musician.
When luck shines on him, it looks like he might finally get the big break that he has been waiting for- that is until he meets Gina.
The daughter of a record label executive, Gina Vile has the potential to make all of Logan’s dreams come true or destroy any chance he will ever have. Can fame and love go hand in hand?
A prequel novella to Sand & Clay.

Four friends. Four secrets. One dare.
Alicia Thomas finally told her friends the reason she divorced her husband—she caught him in his office, naked, a ball gag in his mouth while a prostitute spanked his lily-white ass. But she can’t admit her own fantasy—being at the total mercy of her ex’s gorgeous boss, Richard Brand.
Then in a chance encounter one stormy night, Richard offers to make Alicia’s desires come true. Alicia learns not only to submit to Richard, but his friends as well, and she glories in every minute. But can she abandon her new life when she discovers that Richard’s games have more to do with revenge on her ex-husband than Richard’s desire for her?

I am weak.
I am lonely.
I am a slut.
I am strong.
I am Dominant.
I am independent.
I am Seven James.
My entire life, no one has wanted me, and that was fine, because I sure as shit didn’t need anyone else. Blah, Blah Blah, insert sad story here about negligent parents, and shitty siblings, and you have my life story in a nut shell. When my college boyfriend dumped me, it was just icing on the cake. Five years, and a booming career later I am here to collect my revenge.
That was until a delicious plaything walked into the kink club I frequent, and rocked my typically un-rockable world. Causing me to break the one rule I have lived by since Daniel Alexander walked out of my life, never have sex with the same person twice. Ever.

Rebecca Chase has never been interested in dating, and definitely not in relationships. She only had two goals in life, to get her college degree and to get the hell away from her house. When she meets Lucas everything that she thought she had wanted was now turned upside down.
Lucas Masterson has it all money, fame, and his dream job of being in the music industry. He knows that most people are just out for themselves and will use him as much as they can. When he meets Becca he realizes that he never really knew what he wanted. He thinks that she is the most amazing person he has ever met, but can he balance her and his crazy life?
Can two people who come from completely different worlds make it work or will the people trying to tear them apart succeed?
Get ready to get lost in this crazy romantic adventure and surrender yourself to Lucas and Becca.

Holly is Jacks Best friends little sister. The two of them were raised as family and always were as close as siblings. But as they get older Jack and Holly realize their feelings for one another were something more than that of Big Brother and Little Sister.

Bound will be back for ONE week in October for Breast Cancer Awareness Month! 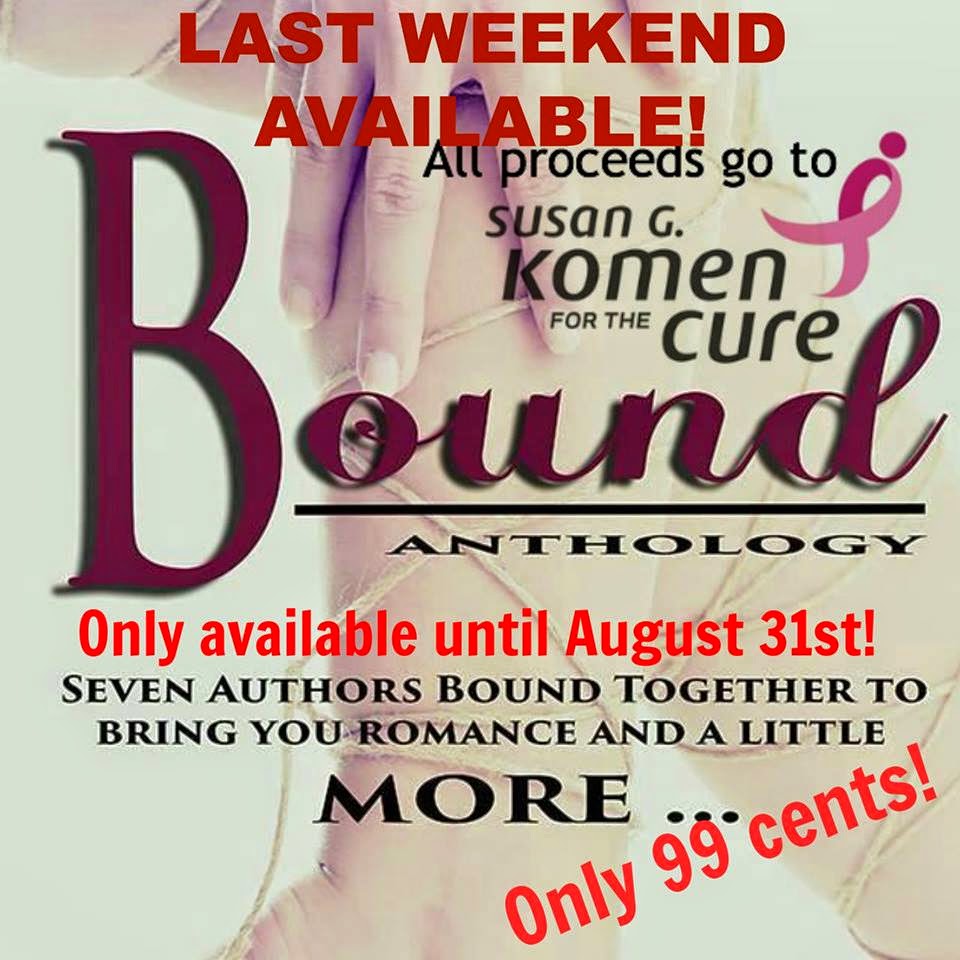